Well here's something I didn't really expect to be doing, but... anybody still interested in a good old-fashioned 1980's Saturday Morning Watch-Along?

I've moved the community over to Dreamwidth.org for security reasons - ends up a lot of people can't get to Livejournal any more because it sets off their security warnings! But don't worry, Dreamwidth is great, and a perfect throwback to LJ circa 2006.

So join me over there! http://saturday-am-80s.dreamwidth.org/ is the new home of the 1980's Saturday Morning Historical Reenactment & Preservation Society :)

Since the gift-giving season is upon us, I thought I'd share the list of 80's cartoons on DVD that I compiled for my website.  I tried to indicate if the series is incomplete or complete and if it has major edits.  Let me know if I'm missing something. Enjoy!

Adventures of the Galaxy Rangers (1986) (Complete)

Adventures of the Little Prince (1982) (Complete)

Captain Power and the Soldiers of the Future (Complete)

Heathcliff and the Catillac Cats (1984) (Incomplete)

It's Punky Brewster (1985-87) (Incomplete, included as special features on each of the live-action show DVDs)

Scooby and Scrappy Doo (1979-80) (Complete, but only available in streaming)

Simpsons, The (1989-present) (Complete, but new episodes still being aired)

Space Stars with the Teen Force (1981) (Complete, included within the Space Stars series))

Spiderman and His Amazing Friends (Complete, but only available in streaming)) 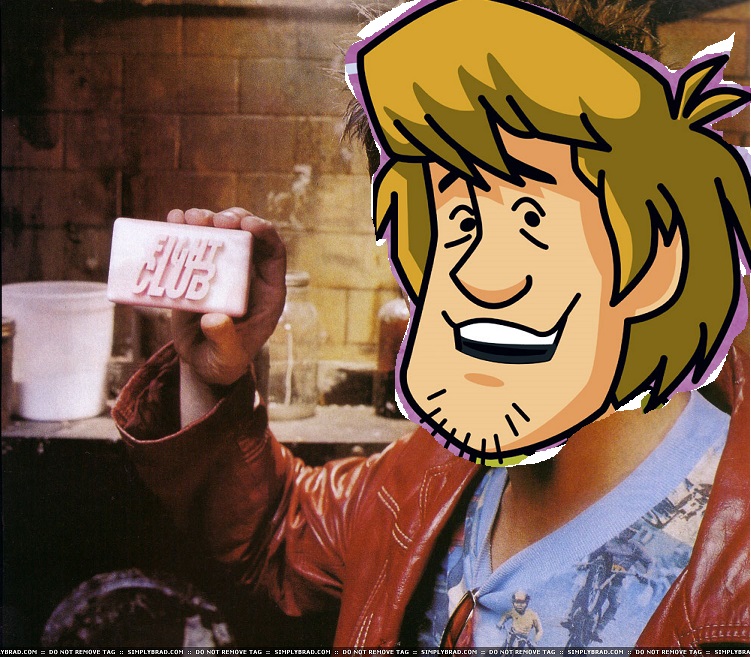 Submitted for your consideration: Fred and Daphne never existed; they are "Tyler Durden" (Fight Club spoiler) fantasy personalities created by a drug-addled Shaggy and Velma. Shaggy, the dimwitted gangly slacker stoner, fantasizes a friend who is a natural leader with classic good looks, a strong physical build, and naturally brilliant. Velma, the dumpy outcast smart girl who is always overlooked imagines a best friend who is a beautiful debutante who can always rely on others coming to her rescue.

Watch the old episodes closely - Fred and Daphne never actually *do* anything, it's always Shaggy and Velma who get stuff done.

Further proof can be seen in their clothing choices - Shaggy and Velma dress in regular clothes. Fred wears an Ascot, Daphne dresses in a purple mini-dress with white go-go boots. It's like Shaggy and Velma are buying clothes from Goodwill, and Fred and Daphne are almost *cosplaying*.

"Scooby-Doo, Where Are You?" is where it all begins. The IRL story is that Shaggy convinces Velma (a very straight-laced "Good Girl" to drop out of school and drive around the country with him. They spend all their time in the back of the van getting stoned and discussing "Mysteries" like ghosts, and Velma blows holes in all of Shaggy's stoner-talk with actual facts and knowledge. Her standard end-of-argument statement is always along the lines of "See, it's not a GHOST, it's THE MAN! It all comes down to MONEY! It's a huge conspiracy where they want you to believe in all this hocus-pocus but it all comes down to an old dude in a mask trying to get more money".

Oh, but it goes deeper. "The New Scooby-Doo Movies" where they teamed up with various random "Celebrities" was just when their delusions were fueled by the acquisition of a little black-and-white TV set. Don Knotts, Laurel & Hardy, The Three Stooges, Batman and Robin, Dick Van Dyke - all "Special Gust Stars" that one would see in plentiful re-runs on their little black-and-white portable TV set in the 1970's.

Then things get sad when you consider that in the 80's it was just Shaggy, Scooby and Scrappy-Doo. Velma obviously had either a miscarriage or an abortion which resulted in their break-up. Unable to summon his delusion-friends any more, it's just Shaggy and Scooby now... and a Puppy that Shaggy projects all his hopes and dreams that he had for his own child some day. He'll be BRAVE! He'll be FUNNY! He'll look just like Velma and... No, not like Velma. Velma is gone. Have to remember that. Have to keep my head straight. My Son... he... he'll look just like Scooby. And so he goes to investigate all those "Mysteries" that he had explored with Velma, only now? Now they're REAL. He can no longer see through simple costumes! His reality is so fractured now that he sees Vampires, Werewolves and Ghosts EVERYWHERE! And he's frightened... very, very frightened...

AND THEN IT GETS WEIRDER!!! Because the *next* season features Shaggy, Scooby, Scrappy... and DAPHNE?!?!? Shaggy is grasping, trying to remember any time in his life where he felt happiness or joy and can only remember those times with Velma... only it's not Velma he sees in his memories, it's Velma's fractured-psyche Goddess Avatar! The long-haired beauty in the flamboyant purple dress and go-go boots! And she's there for him!

I think that those final seasons, the ones before "The 13 Ghosts Of Scooby-Doo", when watched in the proper order are a detailed account of Shaggy's suicide by heroine overdose :/

(Reposted from my own LJ account to combine afterthoughts I have had on the subject and have a singular post that I can point the rest of the internet towards. I *think* I may be the first person to suggest this theory)

OF COURSE when I decide to comit to this community, stuff falls apart all around me and I struggle to fit it in - sorry, folks!

Meanwhile, 1980's Saturday Morning Historical Recreation Society member Bonnie has started a question over on Twitter that I hashtagged as #80sSarurday that you may wish to participate in either here or on Twitter (@Saturday1980s) because it's fun to simply declare your preference, sure, but I kind of need more room to defend my answer than a simple 140 characters.

So simply put, which 1980's Saturday Morning Character do you think was the best?

As a starting point, I suggest that Rubik The Amazing Cube is superlatively the greatest because he has the word "Amazing" right in his name! Only Spider-Man and his friends share that distinction!

I'll be wrapping up Hal Sutherland Week with this simple poll, I swear! We'll be back to our regularly scheduled 1980's Saturday Morning Memories & Reviews come Monday,but for now... the man deserves tribute. SO our poll today is all about those cartoons of his that were in heavy circulation in the 80's! Please note that I *know* Star Trek, Waldo Kitty and Fat Albert are technically 70's cartoons, but they all had heavy circulation in the 80's so I'll allow it - Filamtion DC Super Hero stuff, however, had extremely limited distribution in the 80's due to the Super Friends owning that at the time...

Open to: All, detailed results viewable to: All. Participants: 29

Which of Hal Sutherland's 80's Saturday Morning Cartoons did you dig the most?

In an email shared with me by Rod Cockle (a local artist who spent many memorable lunches with Hal and owns his original Studio desk), Hal Sutherland's daughter Lisa had this to say:

"Hi, I am Hal's daughter, and replying to you from dad' computer, due to having some very sad news.
Sadly, on 1/16/14, we lost my dad to this world due to health complications related to gallbladder..."

If anybody here likes to do Wikipedia editing, it would be great if this information could be updated there.

This really should have been a bigger deal - a few blogs, a facebook post or two here and there, and nothing else. No CNN, no Reddit, no... uhm... what websites do entertainment news? NOTHING for the man who shaped what action/adventure animation of the 70's and 80's looked like!

I finally have confirmation (via Jerry Beck of the Cartoon Research website) through Hal's daughter, Lisa, that he has indeed passed away. Not wanting to pry or seem insensitive, I haven't yet asked for the actual date or cause of death.

To those of us who worship 80's cartoons, Hal Sutherland will forever be remembered for three things:


Having his name turn in to The Sorceress...

... And being the animating force behind all the re-run filler that ran on your local stations while the NEW cartoons played on the Big Three (ABC, NBC, CBS). Stuff like Star Trek, The Archies, The Batman/Superman/Aquaman cartoons that didn't seem to fit in with the versions you saw on the Super Friends, and those weird Popeye cartoons that weren't like the REALLY old ones they played along with vintage Tom & Jerry, Mighty Mouse and Heckle & Jeckyl cartoons but weren't as mind-numbingly awful as the "All New Popeye Adventures" over on CBS.

As the story goes (and I may be misremembering this and/or mixing up multiple versions of the same story), Filmation became a company kind of by accident. Hal Sutherland and Lou Scheimer were both animators working for various production studios when one of those companies just had too much work and not enough budget. Hal and Lou said "Well heck let's make a little limited partnership that can take over some of these jobs for a few weeks". They finished up the work and were prepared to be unemployed again when Norm Prescott called and said "Hey you guys wanna take a crack at making a Superman cartoon?" and they said "Meh, sure, why not, got nuthin' better to do right now".

I try not to go back to shows that ran for multiple seasons, preferring to focus only on the shows that premiered each year. But this... this deserves special mention. For this, the 985 season of The Smurfs, was the season that the Smurfs Jumped The Shark; the show started it's downward spiral here and never recovered.

The culprits, as is often the case with shows that Jump The Shark, was the inclusion of children and animals.

"The Smurflings" were a group of adult Smurfs who had been de-aged by Father Time's clock running backwards, and a little girl Smurf created the same way Smurfette had been made, only using less magical clay. Long story short - The Smurfs was now a show about dealing with these young Smurfs, rather than a show about the Smurfs themselves.

Also joining the cast this season was "Puppy", a thousand-year-old dog who remained young due to the magic locket he wears on his dog collar.

While we wait to hear any type of actual confirmation regarding the death of Hal Sutherland, please enjoy this most excellent tribute to the man and his work -the most awesome Free He-Man Game EVAR!

90% positive that this death rumor is bogus, as only two Star Trek websites, one Animation blog and Wikipedia have reported it and all of them are referencing the extremely vague Filmation Fan Facebook Page post as their "source". Wish I know how to edit Wikipedia properly, get that stuff taken down till there's an actual confirmation...

I drove by Hal Sutherland's house this morning, nothing out of the ordinary there that one would associate with a death in the family (extra cars, etc)... but I was too nervous to just go up and ring the doorbell at 8am asking "Hi, uhm... is Hal dead?"

So far, the "source" of the rumor seems to be a post on the Filmation Fan Facebook Page, which has no links or sources of it's own. The general rule of thumb for these types of rumors is The Rule Of Three - as soon as you see it in three separate sources that are not sighting each other as sources, you can assume it's real. If you have a blog post that refers to another blog post as the source, it's probably not legit.

Oh I hope it's not legit :(
Collapse